From the write up of the interview:

Foursquare co-creator/founder Dennis Crowley, who just announced the Bravo partnership Monday, joined local blogger Jenn Van Grove via Skype Tuesday to talk about the service and a major new primetime relationship that will expose the game to millions.

“It’s a big deal for us because we’ve kind of been the darling of the tech scene,” said Crowley. “I think the best thing for a tech start up is to break out and hit the mainstream audience. I think Bravo is really going to be able to help us with that.”

Personalities from Bravo’s reality shows -- Millionaire Matchmaker, Real Housewives, Shear Genius, Kell on Earth among others -- will offer tips on what they love about local check-in spots.

All this primetime attention may worry some Foursquare users who like the fact that it’s still possible to earn the mayorship at many spots but Van Grove thinks this is positive move.

“Something that saves you money is going to be a net positive,” said Van Grove.

“The Bravo deal has the potential to take it to a whole new audience which is exciting for the company but I don’t see Foursquare making decisions that will alienate their core user base,” she said. “If anything, it will add contextual information about the fun things to do in your city.”

From the clip it's really hard to say...but according to reports the episode was laden with Twitter and Facebook references. So it is quite possible... 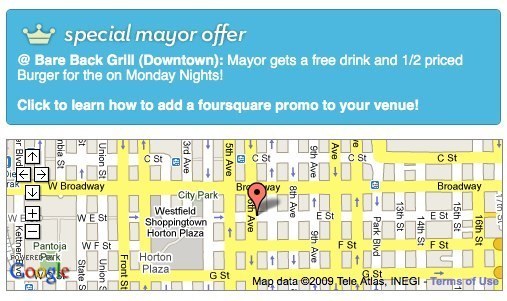 How cool is this?

Bare Back Grill in downtown San Diego is one of the businesses stepping up to the plate in the Foursquare for Businesses game. Monday nights the mayor gets a free drink and 1/2 priced burger. Can more San Diego businesses please follow suit? Mayoral competitions ftw! 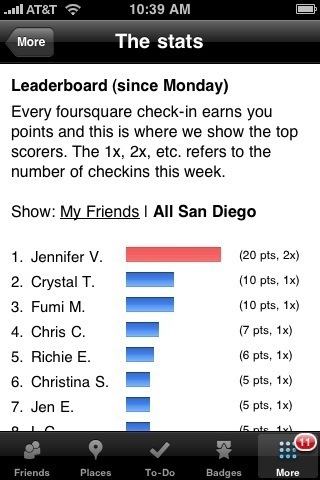 First time ever for me! I know it's only temp, but I had to stake my claim before the infamous DowntownRob takes over the city.

The event, the first of its kind as far as I know, was organized by a user and fan of Foursquare and managed to draw 50+ people to come out at 4pm on a Saturday in the middle of summer.

It started at One and One in the East Village, and everyone drank beer and wore name tags with his/her name and the name of the place where he/she was the “mayor”. The event went on into the evening with people coming in and out and the crowd moving to different venues around the East village.

More proof that I know what I'm talking about when I write about Foursquare being a game changer.

Thinking I might need to get a Town Holler organized here for Foursquarers in Diego. Any businesses interested in hosting (or playing a part) should definitely send me an email or tweet, though the nature of the event would be like a bar crawl (since that's how the game works).

Many of us have been anxiously awaiting a smarter Twitter that not only lets us update our status and connect with friends online, but also lets us find our Twitter friends — in real-life —…